https://www.zdnet.com/article/nyu-scientists-largest-u-s-study-of-covid-19-finds-obesity-the-single-biggest-factor-in-new-york-critical-cases/
NYU scientists: Largest U.S. study of COVID-19 finds obesity the single biggest factor in New York City's hospitalizations
Doctors at NYU Langone Health center conducted the largest study so far of U.S. hospital admissions for COVID-19, focused on New York City. They found obesity, along with age, was the biggest deciding factor in hospital admissions, which may suggest the role of hyper-inflammatory reactions that can happen in those with the disease.

For months, scientists have been poring over data about cases and deaths to understand why it is that COVID-19 manifests itself in different ways around the world, with certain factors such as the age of the population repeatedly popping up as among the most significant determinants.
Now, one of the largest studies conducted of COVID-19 infection in the United States has found that obesity of patients was the single biggest factor in whether those with COVID-19 had to be admitted to a hospital.

“The chronic condition with the strongest association with critical illness was obesity, with a substantially higher odds ratio than any cardiovascular or pulmonary disease," write lead author Christopher M. Petrilli of the NYU Grossman School and colleagues in a paper, "Factors associated with hospitalization and critical illness among 4,103 patients with Covid-19 disease in New York City," which was posted April 11th on the medRxiv pre-print server. The paper has not been peer-reviewed, which should be kept in mind in considering its conclusions.

Among other things, the presence of obesity in the study points to a potentially important role of heightened inflammation in patients, a phenomenon that has been a topic of much speculation in numerous studies of the disease.

Petrilli and colleagues at the Grossman School, and doctors at the NYU Langone Health center, studied the electronic patient records of 4,103 individuals who tested positive for COVID-19 in the New York City healthcare system between March 1st and April 2nd.

It is "the largest case series from the United States to date," write Petrilli and colleagues.

The motivation of the work, they write, was that "Understanding which patients are most at risk for hospitalization is crucial for many reasons," such as how to triage patients and how to anticipate medical needs. 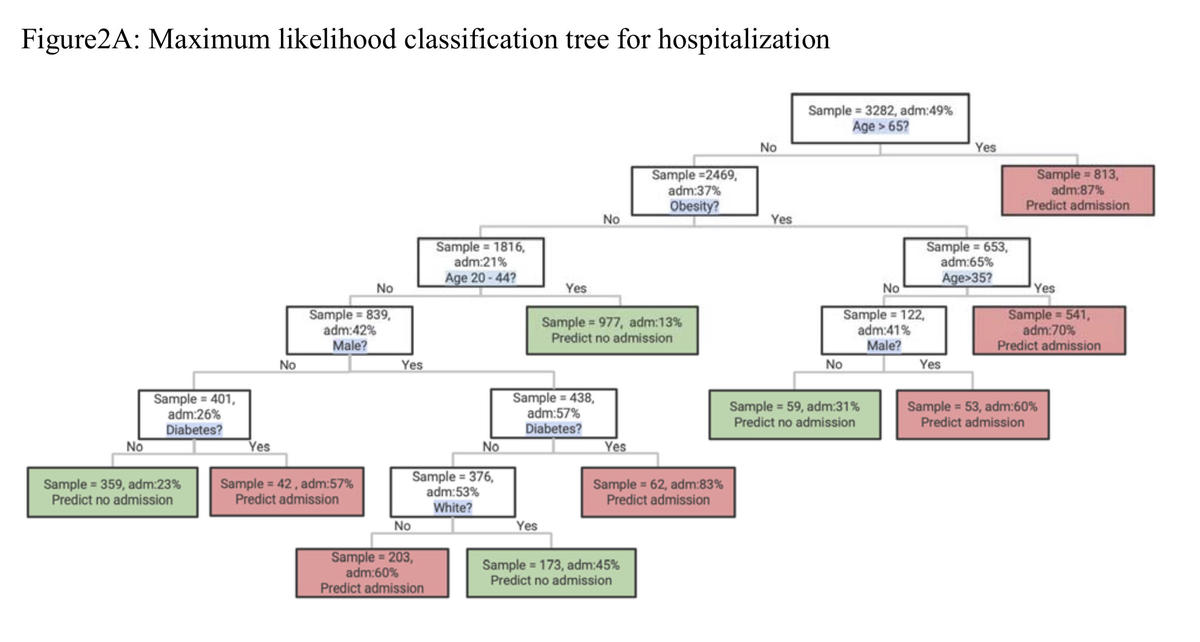 Half of those patients were admitted to a hospital. What the researchers found is that "In the decision tree for admission, the most important features were age >65 and obesity."


Obesity, in this case, was measured as weight relative to a person's height. The authors use a metric scale, so a body mass index of 30 kilograms of weight and higher is considered obese.

The "decision tree," which is shown in the illustration above, refers to the statistical method they used to analyze the patient data. A decision tree is a way to group members of a sample based on their shared characteristics. "For a given population, the decision tree classification method splits the population into two groups using one feature at a time, starting with the feature that maximizes the split between groups relative to the outcome in question." They keep splitting groups into smaller and smaller groups until they arrive at groups that "[have] similar characteristics and outcomes."

Note that in the decision tree, age is the initial determining factor, at the top of the tree, followed by obesity. Hence, obesity is the most significant "chronic" factor, leaving aside age.

Others have made reference to obesity in conjunction with COVID-19, to a greater or lesser extent, but without the data of the NYU group.

Writing in The Lancet on March 31st, RNA virus researcher Gregory Poland summed-up the conditions aggravating the COVID-19 situation globally: "We have an increasingly older age demographic across virtually all countries, as well as unprecedented rates of obesity, smoking, diabetes, and heart and lung disease, and an ever-growing population of people who are immunocompromised—all comorbidities that lead to significantly higher risks of severe disease and death from coronavirus disease 2019 (COVID-19)."

And Drs. David S. Ludwig and Richard Malley of Boston Children's Hospital wrote in The New York Times on March 30th that Americans' risk from the virus is compounded by the fact that they are generally "too diseased."

"The huge burden of obesity and other chronic conditions among Americans puts most of us at direct risk," they wrote. "In fact, with obesity rates in the United States much higher than affected countries like South Korea and China, our outcomes — economic- and health-wise — could be much worse."

But what does it mean for obesity to show up as the big deciding factor for hospitalization?

Obesity is generally known to be associated with inflammation. As the NYU authors observe, "Obesity is well-recognized to be a pro-inflammatory condition." They focus on the inflammation aspect because it has been cited in several studies as being a possible factor in COVID-19, in particular, inflammations that seem to be in a hyper-activated state. But it's not entirely clear what role it plays.

"Hyperinflammatory states are well described in severe sepsis," the authors note, "however, the degree to which Covid-19 related inflammation is similar to or different than that typically found in sepsis is unknown."

Without drawing conclusions, they note that previous studies have shown that patients with COVID-19 have displayed blood clotting, or "hypercoagulability," in the form of thrombosis and embolisms.

The authors suggest that inflammation could be explored further in another study. "We did not have inflammatory markers available for non-hospitalized patients; it is possible that these would have been strong predictors for hospitalization risk as well if available."

All of this is from just one geography, and so its utility may be limited, the authors acknowledge, stating, "factors associated with poor outcomes may differ elsewhere."

Given the scale of the outbreak in New York — the city has had 98,715 confirmed cases as of April 12th, and 6,367 deaths, according to data from Johns Hopkins — New York is becoming its own field of study.

For example, the same day as the NYU group, scientists at the Icahn School of Medicine at Mount Sinai reported the results of an extensive study of the genome of the virus among New York cases. What they found was both a melting pot, as it were, of strains of the virus, and peculiar local differences.

"We find that New York City, as an international hub, provides not only a snapshot of the diversity of disease-causing SARS-CoV-2 at the global level but also informs on the dynamics of the pandemic at the local level," write the authors.

That suggests the kinds of clinical data found by the NYU researchers may at some point be combined with the genetic data and other factors as scientists gather more data and dig deeper.